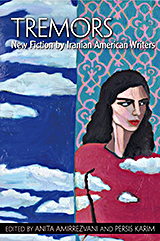 New anthology of Iranian-American fiction co-edited by Anita.
Read a review at the Harvard Review Online…

Anita participated in a panel discusstion on Iranian American fiction for the Asia Society on December 4, 2013. Watch the highlight or the complete discussion.

Anita and her co-editor for Tremors, Persis Karim, along with Amir Soltani, appeared on the show on May 8, 2013 to discuss the anthology and Iranian-American culture and community. Listen to the show archive… 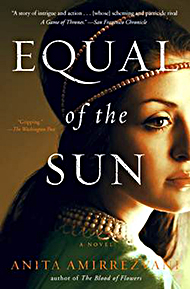 “Amirrezvani’s 16th century Iran is a world that seethes with intrigue, passion, and lawlessness…where a brilliant young princess and a servant make a desperate pact to control the government and fate of the country. Equal of the Sun is an irresistible novel.”

“A dazzling historical novel of ancient Persia, a fairy tale of universal resonance, Equal of the Sun is a story of love and ambition, loyalty and intrigue, the eternal anguish of a heart—and a country—at war with itself.”

—Gina Nahai, author of Moonlight on the Avenue of Faith and Caspian Rain

“An ambitious, well-crafted historical tale set in her native Iran, featuring a memorable heroine. This time, the setting is the intrigue-filled 16th century Persian court…Fans of smart historical fiction should be on the lookout for this one.”

“Anita Amirrezvani again draws on a rich, storied Persian heritage for a novel that is both timely and timeless. Knowing it comes from a place too many of us know too little of makes it even more vital and elegantly alive in the present.”

“Anita Amirrezvani evokes Shahrazad in this mesmerizing tale of a princess and her eunuch advisor in sixteenth century Iran. Employing language as lush and exotic as its setting, she gives us a novel about love, devotion, trust, intrigue, and, ultimately, justice.”

“Equal of the Sun is a fine political novel, full of rich detail and intrigue, but it’s also a thought-provoking study of the intersection between gender and power.”

“Exhausted the available novels about the dramas of the Tudor court? You’ll love this enthralling story set in 16th-century Iran, based on the life of a fascinating princess.”

“Equal of the Sun is a page turner, with plenty of gripping moments. Here’s hoping Amirrezvani will write many more tales illuminating the incredible history of the Iranians.”

“The scheming and parricide rival A Game of Thrones” 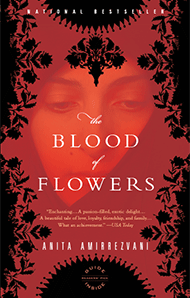 “Luxuriant language threads together characters who are genuine and robust, equally flawed and sympathetic, as if they really exist outside the page…The Blood of Flowers is simply a stunning debut.”

“Anita Amirrezvani has written a sensuous and transporting first novel filled with colors, tastes, and fragrances of life in seventeenth-century Isfahan…Amirrezvani clearly knows and loves the ways of old Iran, and brings them to life with the cadences of a skilled story-spinner.”

“Anyone who liked Khaled Hosseini’s A Thousand Splendid Suns will enjoy this tale, too…The Blood of Flowers is filled with intricate designs, vivid colors and sparkling gems.”

“Amirrezvani skillfully threads culture, romance, and art into an elegant tale of self-realization and empowerment.”

—The Independent on Sunday, London

“A staggeringly well-written novel…Amirrezvani deserves all the dazzling cliches that a dust jacket can possibly accommodate.”

“Like the most prized Persian carpets, it all fits together.”

“Stories-within-the-story and richly colored glimpses of Isfahan society, both high and low, as well as much detail on the business of designing and creating carpets, swell the pages of Amirrezvani’s novel…A lavishly detailed debut.”